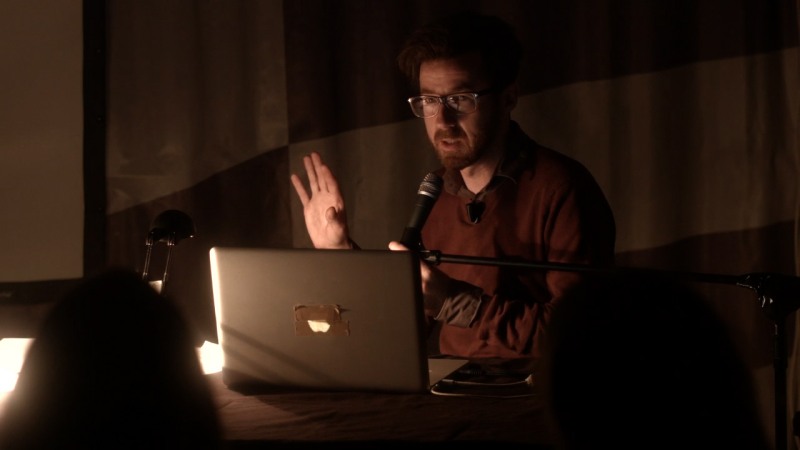 Impakt welcomes Daniel Cockburn as a resident artist from Mid April until late May 2015.

Daniel Cockburn was a resident artist at Impakt before in 2011. His films as well as his performance lectures have been presented to much acclaim. This year, he was selected as part of the European Media Arts Residency Exchange 2014-2015.

Daniel Cockburn’s video works deal in rhythm, language, cognitive patterns, and thought experiments. He performs himself as somewhere between fictional character and autobiography, using gesture, repetition, and a heady quantity of voiceover, in an attempt to detail — in an obsessive, overanalytical, and possibly unhealthy manner – the shape of thought. If his videos set themselves impossible cognitive tasks, they gamely document the traces of their failure.

The thought-shapes in Cockburn’s work are often in relation to pop culture, especially cinema; his work has a love-hate relation with movies (Hollywood and otherwise), craving and envying their power while simultaneously critiquing their more shadowy ideological aspects. Daniel Cockburn strives to engage audiences with his work, often via humour. Bergson called humour “something mechanical encrusted upon the living”. Being human these days means embodying this mechanical/living tension. His work aims to delve into this tension in a humourous, unsettling way.
In his 2015 EMARE residency Daniel Cockburn will research, create, and present an hour-long lecture-performance at Impakt Headquarters (Lauwerecht 10, Utrecht) on Tuesday May 26, by the title “All The Mistakes I’ve Made, part 2 (how not to watch a film)”.

In the year 1994, two of America’s reigning horror-movie directors each released a film: John Carpenter’s “In the Mouth of Madness”, and Wes Craven’s “New Nightmare”. Interestingly, these two films were both postmodern approaches to the idea of storytelling – but with opposite conclusions. One film said that stories are a tool for us to capture and defeat evil; the other movie said that stories are the tool that evil uses to enter our world and defeat us. This is the starting point for Daniel Cockburn’s lecture-performance “All The Mistakes I’ve Made, part 2 (how not to watch a film)”, taking place at Impakt (Lauwerecht 10, Utrecht) on 26 May at 8pm.

This presentation is the final product of Daniel Cockburn’s EMARE residency at Impakt. Beginning as a sincere-seeming academic lecture on cinema, it will slowly progress through greater and greater leaps of logic, devolving into more and more paranoid conclusions, to throw the audience into a hopefully-delicious destabilization wherein not even meaning can be trusted.