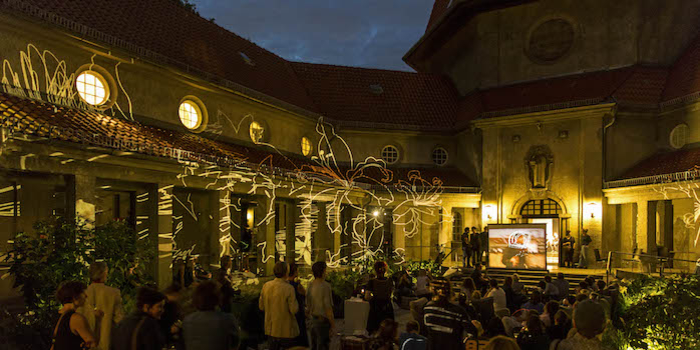 Silent green is an event venue and independent project that has found a unique home in Berlin in the historic premises of the former crematorium in Wedding. It will be the location for the EMAP group show 2024 in collaboration with werkleitz and transmediale in Berlin.
Founded in 2013, the privately run cultural quarter sees itself as a protected space where people can think, research and experiment. The focus is on cross-formal work: The boundaries of individual artistic disciplines are to be pushed in order to link them into new, hybrid forms.
The basis for such work is the unique creative infrastructure on site, which results not only from the programming work of silent green's team but also from cooperation with the tenant community: In 13 rental units, the Kulturcampus brings together around 100 creative and creative-economy professionals on 6000 square metres. These include institutions such as the Musicboard Berlin, the K7! label, the Harun Farocki Institute, transmediale e.V. and the publicly accessible film archive of Arsenal - Institut für Film und Videokunst e. V., all of which are major Berlin players in the fields of music, moving image and visual arts.
The in-house restaurant, MARS | Café & Bar, is the heart of silent green; somewhat hidden in the side wing of the building, it offers peace from everyday life and a place for informal exchange between tenants, the public and residents.
Since 2015, meetings, conferences, seminars and workshops as well as special celebrations have been held in the historic part of the building. In addition, the Kuppelhalle has established itself as a unique venue for concerts, readings and film. In structural contrast to this is the underground concrete hall, completed in 2019. With a total area of 1600 square metres, it is now also possible to hold cross-media exhibitions and productions of a larger scale in the fields of film, music and discourse. In the interplay of the historical part of the building and the new buildings Betonhalle and Atelierhaus with five further multipurpose rooms, a large-scale creative campus has been created.
As an independent venue and interdisciplinary production site in the field of art and culture, silent green also rents out its event spaces to third-party projects. In this way, a place of overarching encounter and participation is to be created, where networks and communication spaces between practice and theory, research and application, production and presentation can form.
Under the title Film Feld Forschung (Film Field Research), silent green, in collaboration with co-initiator Stefanie Schulte Strathaus, is dedicated to the forms and edges of documentary narration. A centre for moving image art is to be created - with exhibition projects, discursive and performative formats. The music programme at silent green is not dedicated to any specific genre. Instead, in its diversity and its preference for new formats, it wants to open up an in-between place that enables an exchange and experimentation between the genres and its audience.
Silent green is a matter close to our hearts. All proceeds therefore go directly back into maintaining the place and producing artistic and cultural projects. The goal is to build a sustainable creative infrastructure in Wedding that is firmly anchored in the neighbourhood and at the same time a cultural attraction beyond Berlin and into the world.