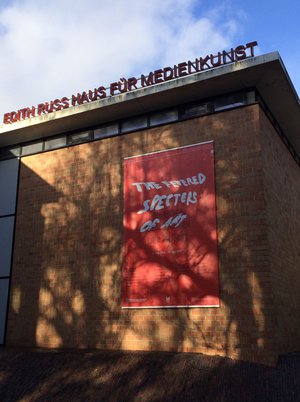 The EDITH-RUSS-HAUS for Media Art was first made possible by an endowment by Edith Ruß (22.1.1919 – 18.7.1993). According to her will, the City of Oldenburg was able to build a house "for the arts". She wanted to form a site to create "art for the transition into the twentieth century." This initiative was the genesis for the concept of a site for Media Art with both exhibition space and guest apartments.
The City of Oldenburg has a rarity in the landscape of contemporary art: The EDITH-RUSS-HAUS for Media Art, a place solely for the presentation and discussion of media art.
The concept is based on the special demands of art realized with new media. Media art often works with light, movement and the flow of digital, electronic data. Like a video with its series of consecutive images or net.art in which one clicks from one Internet page to the next, media art tends to be processual and immaterial. This is the reason why the EDITH-RUSS-HAUS for Media Art is not conceived as a museum where art is kept and collected, but rather as a place where media art is presented and discussed. This site must be seen as a channel through which information on art with new media flows. Through presentations and special events we offer a spectrum of the possibilities of media art. The focus is on the content of the artwork and technology's influence on shaping and defining artistic ideas. Beyond the program of discussions and presentations, we will also hold exhibitions intended to address subjects which are socially relevant and future-oriented.
The site has two buildings. The first building has two levels of space for exhibitions and presentations. The second has two apartments plus one artist's studio/apartment.