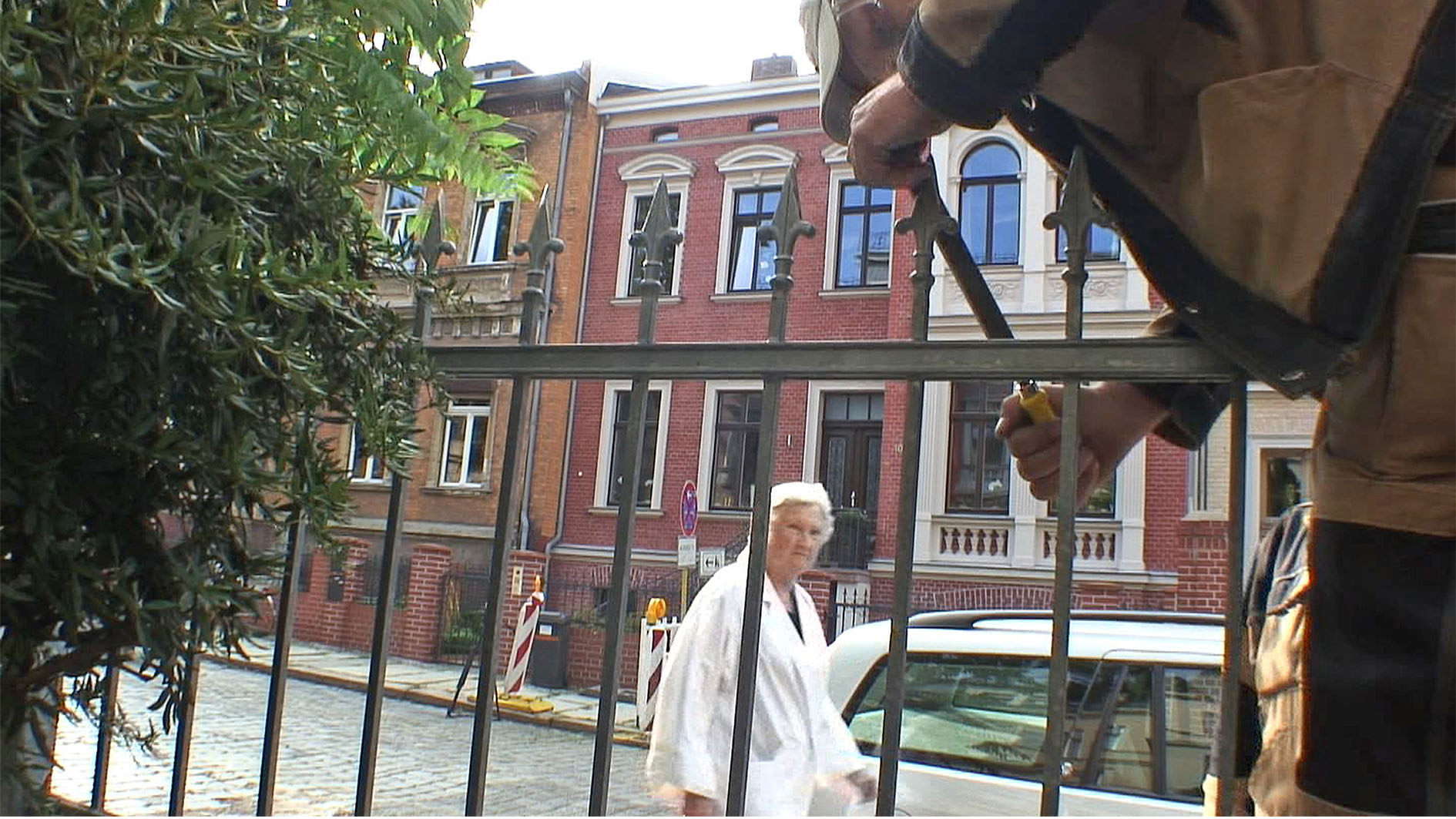 Leopold Kessler’s work deals with the demographic development of the Halle region and ironically and succinctly visualizes the fear the “long-time residents” have of the unfamiliar or foreign: the tips of a garden fence are sharpened in anticipation of impending conflicts.

Sharpened edges of iron fences poke the sky in the city of Halle. They reflect the summer sun like shimmering, but dangerous, treasures. They make the fictitious intruder shake with fear, and the innocent passersby’s heart freeze, as they imagine those passive weapons harming the human body.

Leopold Kessler's new intervention chooses an enigmatic object standing on the border of public and private space, a fence that creates this opposition. He does not simply choose this object as the main protagonist of his new piece but introduces a seemingly normal and entirely new activity for the homeowners who occupy the space: they sharpen the fence themselves.

The artist convinced several local inhabitants of Halle to take part in his project by incorporating this activity into their daily habits as a simple and harmless chore, providing the illusion that this activity is just one of the million of the daily little household maintenance duties that simply needs to be completed along with the others: like watering the plants, cutting the grass or collecting roses.

Kessler orchestrated and then documented the absurd activity of fence-sharpening so as to provide a strong image that leads us to elaborate on the current conditions of the relation between public versus private space, and the level of anxiety related to this question in society.

Most of Kessler's works deals with multi-layered and complex questions of public space, the codes, divisions, norms and invisible but pressing social rules that guide our behavior while acting and inhabiting public space. His character – the dead pan engineer in the signature blue uniform, who sometimes carries around a portable tool box – believes in civic duty and simply repairs things that have to be repaired in public space, or that have to be modified in accordance to what Kessler believes is their appropriate use. All these seemingly modest interventions reveal a sensitive domain where social and political critique should be applied. Kessler is highly interested in how these social relations and roles are inscribed in public space, and seeks small cracks and gestures he can install to reveal their cruel automatism.

One critic of Kessler's work claims that the invention of this very unshakable character enables the artist to act calmly and precisely even when the intervention has some subversive or highly absurd quality. “His conviction as to the appropriateness and necessity of that task appears unshakable”1. This deep conviction is needed when one redirects the water of a private swimming pool of a hotel into the public domain in the form of a makeshift roadside fountain (Rotana Fountain, 2007), or privatizes electricity in public space through the application of a plug to a public lamp post.

The interventions follow a certain logic and need, although his guerrilla-style actions are a far cry from the norms of acceptable behavior. Always unexpected, and without pre-authorisation, Kessler makes his spontaneous appearances in different urban settings, or simply “misuses” the city and its public vehicles in order to indicate the wasted number of creative and innovative ways in which inhabitants could use their surroundings.

Humor and irony are integral and crucial to Kessler’s strategy, as he describes himself: “I try to find cracks in the common logic by following the logic to a certain point. That's also how slapstick functions, I guess”2. Erecting fences, that’s normal and accepted, but agitating that these fences should be sharpened, and even organizing the sharpening event, unavoidably leads to the realm of the slapstick, where the comic element is put in motion by the interaction between the person witnessing the activity and the shadow of the absurd, revealing socio-political connotations.

It does not stand alone within Kessler's oeuvre that a work revolves around a symbolic act that makes visible a certain deep fear that is easily recognizable by others as a shared experience. In the piece titled Depot (2006), another hilariously absurd and ironic piece, he used the light box of a police station, more precisely the space behind the “O” on the sign, to hide his money and use it as a personal deposit box. Or, in the case of a previous intervention in which his interest was focused on the mechanisms of collective and generated paranoia, he systematically punched bullet holes in traffic signs with a handmade pincer as he walked around Vienna (Perforation cal. 10 mm, 2007).

But Defensive Measure is in one way unique in comparison to previous works. Kessler invites other participants into the act of creating this disturbing imagery in public space, namely the owners of the houses and gardens that these fences are enclosing. He steps back and abandons his DIY repairman character, or rather becomes the invisible figure of the coach who trains the homeowners. The absurdity inherent in the act of creating these passive and aggressive weapons comes dangerously close to the pathological.

In his sharp political and social critique, Kessler's rhetoric remains in the field of the poetic, the poetic of the banal that sharpens the gaze, and leads to the understanding of how micro-interventions can make otherwise hidden macro-dynamics visible.