So Kanno (in collaboration with Akihiro Kato and Takemi Watanuki)

So Kanno is a media artist based in Berlin. His works are mainly based on robotics. Rather than the perfect control of industrial robotics, he is interested in the unpredictability, organic behavior, emergence, and errors and noises that systems can have, and develops systems that utilize and induce these elements. His wide-ranging activities include installations using self-made robots, performances and workshops. He often works in collaboration.

Akihiro Kato is a media artist born in 1992. He graduated from the Institute of Advanced Media Arts and Sciences (IAMAS) and since 2021 he is based in Tokyo. He creates works that depict the relationship between technology and society through a combination of digital/physical media. Works include "TRUSTLESS LIFE" and "BAIS," which depict the possibilities and challenges of a society in which blockchain technology is applied through board games, and "WAN NYAN WARS," a project that questions the value of NFT by depicting the battle between dog factions and cat factions.

Takemi Watanuki creates works with the keywords of "crowd movement," "animality," and "artificial life”. His works include "node hands," which expresses the emptiness of communication in the modern age using crowd robots, and "living hakoniwa," a virtual space in which artificial life cycles through the food chain.

Tereza Teklić: You are a media artist working a lot on and with robots. What type of robots do you find intriguing? What aspects of working with devices inspire you in developing your artistic projects?

So Kanno: I’m interested in biomimetics, swarm robotics and BEAM (biology, electronics, aesthetics, and mechanics) robotics. In most of the cases, those systems have a distributed or decentralized structure. Anything that physically moves gives the viewer the impression of life. It is difficult to answer what life is but I think it would be interesting to create something that looks as if it was alive and that could give us a chance to think about ourselves from a different perspective.

Tereza Teklić: Kazokutchi, the project that you are developing in collaboration with the artists Akihiro Kato and Takemi Watanuki within the EMAP residency at KONTEJNER, is focused on digital artificial life and NFTs, taking the form of a miniature robot with a display. What do you think about the impact NFTs and the blockchain technology had on the art world so far? Is it something that has potential to last as a new way of how artists approach their art? What made you explore this field and push your art based on robotics in a new direction?

So Kanno: NFTs have been rapidly gaining public recognition since 2021. At first, the negative aspects of this medium must be mentioned. It is capitalistic and has a high environmental impact. On the other hand, NFTs are certainly the only media that can be propagated to all global blockchain immediately and confirmed publicly at any time. The rapid recognition of this new medium brought new opportunities for artists who work on digital media to sell their works, which has given rise to many forms of expression. It has also given rise to debate about NFT itself and the rights and issues surrounding it. Regardless of the quality, there is no doubt that it contributed to the development of digital culture.

I cannot clearly say how artists will handle blockchain/NFT in the future. However, for those who have been working on digital media, there are not many platforms that can treat digital works like physical objects, so I think it will be considered. NFT gives uniqueness to the digital data, while at the same time it keeps characteristics of the digital (easy to copy perfectly, fast transfer, no degradation). I believe that new expressions continue to emerge which are focusing on characteristics of this medium.

For the Kazokutchi project, the initial interest was in individuals in a swarm. I have a swarm robot project called Lasermice, which emerges dynamic movement from collective behaviour, but each robot is designed the same. Within the project I gave a workshop, that brought some change. It was about renting one robot to one child, they decorated and named it, also gave it a personality. And this gave the swarm another layer. When Akihiro, Takemi and I were discussing ways to use NFT as a medium, we came up with this idea of combining a physical robot with a digital life that can be named. This was the starting point of Kazokutchi.

Tereza Teklić: The EMAP residency offers the selected artist the opportunity to work with a local artist, artists group or collaborator while on location. Your residency in Zagreb takes place at Radiona – Zagreb Makerspace, a citizen lab consisting of a makerspace/hackerspace, media art lab, repair cafe dealing with DIY (do-it-yourself), DIWO (do-it-with-others) and DITO (do-it-together) culture, interdisciplinary non-formal education, and hybrid activities. Have you benefited from working in a context like this, where there is a strong emphasis on community and co-creation? How did it (or maybe not) affect your work on the project?

So Kanno: It is very inspiring to work at Radiona. Akihiro, Takemi and I held a workshop there, called Physical generative drawing and NFT, making a drawing machine using robots that are part of our project, and even minted the results from the workshop on the NFT marketplace. The ideas for the drawing machine conceived by the participants throughout the workshop were very original and exceeded the methods we had envisioned. We also had some enriching collaborations during the workshop, where we programmed some of the code that makes the robot work, and participants updated the materials and methods of their drawings. Several of these elements provided hints for future plans for Kazokutchi and triggered discussions within the team. 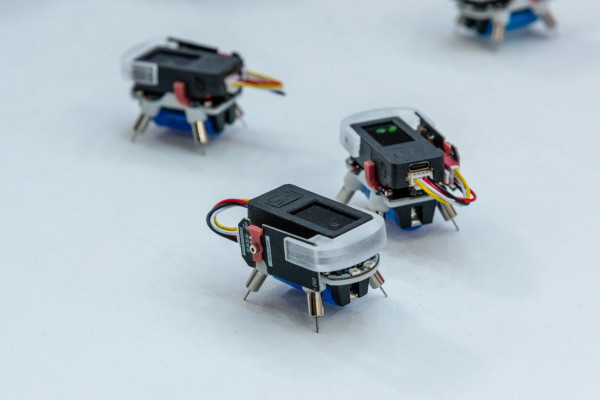