Paula Nishijima is a visual artist with a research-oriented practice that unfolds at the crossroads of life science, technology and participatory social practice. She investigates the collective and self-organised behaviour of living systems in nature, and how it inspires more collaborative, sustainable and more ethical forms of relationships between humans, nonhumans and the environment. Her artistic research materialises and is documented through different media, such as video, photography and bioart.

Marlén López is an architect and director of Biomimetic Laboratory in the Redes Natural Park (Asturias, Spain). Her research and work focus on the application of biomimicry to architecture and engineering through new technologies of digital fabrication. She currently combines her work as an architect and designer at Volumínica Studio, founded in 2017, with teaching and research at the Biomimetic Laboratory. Throughout thirteen years of experience, she has developed different architectural and research projects, and publications.

LABoral: Tell us what interests you about living systems and how you came to work with plants?

Paula Nishijima: My interest in living systems is firstly a political interest, as for human concepts and social structures the way how power and control ‘circulate’ within a system, society or group establishes the way how individuals see themselves in the world, and, consequently, their identity and place within it. I have been researching into network topologies (centralised, decentralised and distributed) for a few years, which led me to study collective behaviour, and how multitudes, swarms and other collectives organise without a central control. Swarms in nature—e.g., ants and bees—are intriguing not only for their self-organisation and emergent behaviour—which no scientist fully understands how they work—, but also because it offers a different view of the ‘politics’ in a collective: they don’t have a leader nor a boss telling them what to do. No one in the colony has a global view of what is happening, but they all work collaboratively to sustain and protect the group. I am interested in what organises or controls what I call these ‘forces of life’: what are the patterns, rules or protocols in a (living) system, i.e., what are the forces that connect the parts?

Something similar happens with plants. They have a modular structure and a distributed intelligence, i.e., they have no brain or central control. Plants diverge in several aspects from animals: their temporality is slow and they cannot move quickly. Even this way, they excel in adaptation to the hardest and most catastrophic conditions—addressing one of the main characteristics I am interested in living networks and systems: resilience. Plants are resilient to the changes in their context. They developed complex mechanisms, adaptive tools, behaviour and forms of all sorts that humans have been mimicking to transform into different technologies. My research in this residency started in the Natural Park of Redes, Ladines, where Biomimetic Laboratory is located. Marlén López, who introduced her fascinating work and PhD thesis about adaptation of local plants that could be used for architectural solutions was my inspiration to work with the Asturian plants. I spent almost two weeks doing field research with her and learning about the local species and their adaptations to the harsh climate of the mountains.

LABoral: What have you discovered about Asturian plants that can be seen in Plug-in Habitat?

Paula Nishijima: Plug-in Habitat features two artificial modules: one based on the cushion plants and the other one based on the widespread presence of ‘pinchos’ (thorns, prickles and spiky structures) in the Asturian vegetation. In the Natural Park of Redes, I saw these two structures’ as a sort of architectural adaptation of plants, whose programming’ corresponds to a larger period of time—during which plants adapted their form, colour and behaviour to their environmental conditions.
In the case of cushion plants from Ladines, their dome shape creates a microclimate inside, where it’s warm and moist. They are usually higher than cushions from areas of milder climate. The cushion plants that grow in the mountains, as well as many other plants I researched there, evolved in a way to endure periods of drought and cold winters. I also observed that different species of plants grow entangled, cohabiting with other organisms (eg. insects) that find shelter in their spiky bush. In Biology, it is often referred as a 'nurse’ plant, since it improves the conditions for other species to grow and live within.

In contrast to the motherly profile of cushion plants, the second module is inspired by the thorns and spiky structures in the Asturian plants. Most likely, it is the Spanish word for all these sharp and stiff ends that has drawn my attention to them: ‘pinchos’. ´Pincho’ is also a generic name for a small snack—which is served ’spiked’ with a skewer or toothpick. Pinchos are rooted in the culture of Asturians as much as they are the nature of their plants. I like to think, however, of the other way round: ‘pinchos’ are part of a defensive culture of plants that populate the mountains. Plants can’t move quickly, but they can grow their own trenches, redesigning their leaves, roots and twigs. Sharp and pointed weapons are not hidden, but their body parts. Stems of gorse become spines. Leaves of the common holly—the ubiquitous ‘acebo’ (Ilex aquifolium)—are softer and lighter towards the sun, while spiky and darker, when closer to the shadowy earth. An army of hairy nettles covers the ground to ward off predators; blackberries’ prickled shoots are spread across the field, entangled, and confounded with barb wires in a sort of mimicking dance. These plants adapted their whole anatomy to survive herbivore predators—quite popular in that area—and, mostly interestingly, the scarcity of water.

Both modules in the exhibition are placed inside a bigger cushion plant’ dome—alongside two screens with footages that I shot during my research in Ladines. These works constitute a 'micro-ecology' within the dome, which creates a ’shelter' in the larger space of the institution. The modules are also connected to an actual cushion plant located at the Atlantic Botanical Garden in Gijón. Parameters like temperature and humidity are measured inside the cushion plant, which regulates them according to the changes in the environment. The modules in the exhibition receive these data and react to the plant: the cushion module regulates its luminosity according to temperature and the other module moves its thorns reacting to the change in humidity. For me, creating and connecting these modules inspired by cushion plants and thorns is a way to give contour and symbology to my research into the complex mechanisms these plants developed not only to survive as individuals, but as a whole system as well.

LABoral: Plug-in Habitat is a project in which you have had numerous collaborations from different disciplines. Tell us a bit more about this and what they contribute to an artistic proposal?

Paula Nishijima: I consider collaborations part of a meta-process in my artistic practice. In this residency I had the opportunity not only to collaborate with a local artist, Marlén López (whose collaboration I describe above), but also to expand the network and include new and long-term collaborators that are important part of the project. The ‘architectural’ view in Plug-in Habitat benefited from interpretations that came from Biology.

When I had just settled in Gijón, I met Borja Jiménez-Alfaro, director of the Atlantic Botanical Garden, who invited me to attend The 7th edition of the Seed Ecology Conference running through that same week. It was a fruitful contact with an international group of scientists, in which I introduced my first intentions of Plug-in Habitat and they gave me lots of inspirations with their different researches. I was also amazed with the Botanical Garden itself and with the variety of species I learned about—also in my visit to their greenhouse. The idea of connecting a plant located there with the modules in the exhibition is a way to symbolically create a common space in-between the natural space of the BG and the art space at LABoral.

A specialist in Bionics and ants, Prof. Tobias Seidl, with whom I have worked for two years, also took part of the artistic research. In our collaboration, Tobias and I explore different formats and architectures for existing and imagined systems. We speculated together about the functional architecture of Plug-in Habitat, in the present and for the future.
Therefore, when I speak about collaborations as a ‘meta-process’, this is about how the connections with these different agents unfold and change the way of how a certain ‘habitat’ is generated in Plug-in Habitat: one that is about unpacking the possibilities for a system that is not fully created and programmed by one view, but through different perspectives. 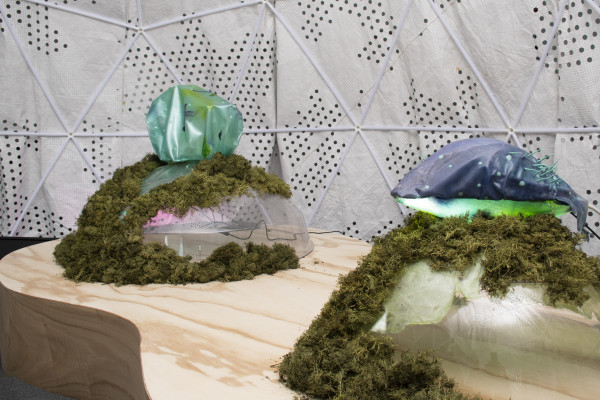